One of the biggest mixed martial events of the year in this region will be held in Colchester this Saturday. Mark Heath previews a mouth-watering night of fight action at Cage Warriors Academy South East 24.

WHAT, WHEN AND WHERE?

Cage Warriors Academy South East 24 will be held at the Charter Hall in Colchester on Saturday, October 19. There are 29 fights on the card, with the action set to start at 4.30pm. The main event, pitting local favourite Leigh Mitchell against Rico Biggs, should get underway at around 10.30pm. The promotion, known for showcasing the best amateur talent in Europe, is affiliated to the senior Cage Warriors show, which means many of the best fighters here will make the step up to the big stage. 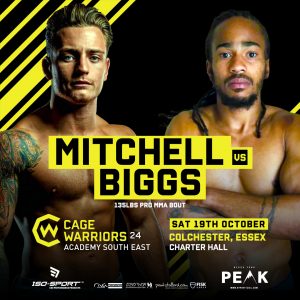 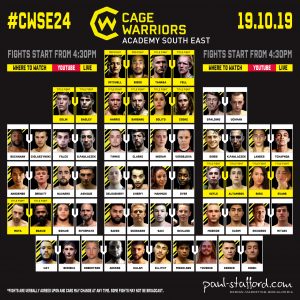 The only pro fight on the card, pitting returning hometown favourite Mitchell against slick striker Biggs. Former CWSE amateur flyweight champ Mitchell (0-1) broke his hand on his way to defeat in his pro debut last June, and moves up to bantamweight here to face the more experienced Biggs (4-1). On paper it looks to be a classic striker v grappler match-up, with BKK Fighters product Mitchell known for the latter, a smothering wrestler with a heavy ground game. But during his absence southpaw Mitchell has been improving his stand-up, and says he wants to test himself on the feet against Biggs. A fascinating fight is in store.

"I can't wait. Everything just feels right, everything in the gym is going perfect and I feel like the move up to 135 (pounds) is a smart move for me. I think Rico looks good, he's a good stand-up guy - that being said I do think I've fought better stand-up guys - but obviously I'm a strong wrestler, he's a good striker, but my striking is getting up there as well so it would be nice to let my hands go and show people I'm not just a wrestler. Work it all together, stick it on him on the feet, then if I want to take him down and put the pressure on. I either see it being a bit of a war or I can see myself applying that pressure and just grinding him out."

An amateur superfight between CWSE featherweight king George Tanasa, one of the hottest prospects in the country, and Contenders champ Jimmy Fell, who sees this as an opportunity to steal all of Tanasa's hype and momentum. On paper, you'd probably have to make Colchester's Tanasa (6-1) the favourite. He's the sixth-ranked amateur featherweight in the country, an elite wrestler with powerful punches and kicks. But while Fell (4-1), from Blue Wave in Bury St Edmunds, is ranked more than 50 places below his foe here, he is a BJJ purple belt with a boxing background and the heart and cardio to really push Tanasa. So will Tanasa, another BKK product, risk going to the floor with Fell, and who's the better striker? There are many questions going into this one. If Fell can survive the first round Tanasa storm, this fight could be very interesting indeed.

"I'm so excited to have another fight, get another win and take my belt home. I've seen Jimmy fight, he's doing very well, a good jiu-jitsu guy, and I'll try to implement my plan in this fight. Last fight was very good for me, I improved my style and my plan, and I played with him like a ping-pong. This is part of my legacy. Jimmy's very good, but I think he's slow - I'm more powerful, more speedy, just better. I'm expecting to win this fight, not easily, but I'm expecting to win. I've been working very hard for six months, not taken one day of rest, improving everything. I'm going to win. If he knocks me out, I'm retiring."

"I'm really excited, I can't wait. I know George, I've seen him fight, he's a really good fighter and I'm happy to be fighting him. George does what he does very well, but everyone's got weaknesses, everyone can be beaten and we think we can find out what those are and exploit them. I'm comfortable everywhere this fight goes. George hits hard, he's very strong, but I've seen him gas. It's not that I don't think he can do five rounds, I don't think he can do three with me. In this fight I'm either going to submit George, or knock him out." 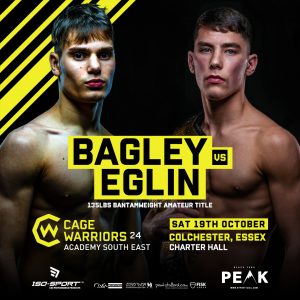 FIGHT OF THE NIGHT?

The main and co-main are cracking fights, but the clash immeadiately before them could well steal the show. In what promoter Jack Mason rightly calls one of the best amateur match-ups in the country this year, bantamweight Jack Eglin (8-4) defends his belt against Nik Bagley (6-4-1). And what a fight it should be! Both guys are dynamic, all action strikers, who can hold their own on the ground too. Eglin looked sensational in his last fight, a 33-second stoppage of Duncan Djillali at CWSE 23, while Bagley had an impressive submission win on the same card. Both men are planning to turn pro after this one, and you just get the feeling it could be a bit special.

In terms of the other bouts and names to look out for, Ipswich fighter Adam Spalding (4-6) bids to reverse a five-fight losing streak with a drop to featherweight for a tough-looking match-up with the 4-1 Kamil Uchman. Win or lose, Spalding is a warrior who is always in good fights.

BJJ danger William Timmis (5-3), from Clacton's Primal Combat Academy, pushed Tanasa all the way in their fight in April, and returns here against Jack Clarke (3-1).

And Muay Thai phenom Shanelle Dyer (2-0), fresh from featuring on a BBC Three documentary about female fighters, faces Bezan Mahmudi (2-2) in a flyweight clash. Speaking of Muay Thai phenoms, bantamweight Jon Vetle Furuheim, aged just 17, is already 4-1 in MMA and nicknamed 'Wonderboy'. That tells you all you need to know!

Look out for the rest of the BKK Fighters too, the powerhouse gym is a producton line of fighting talent - Charlie Falco, Hannah Ingram, Yousaf Saeed and Jamie McBride join gymates Spalding, Tanasa and Mitchell in taking to the cage here.

If you've not got a ticket, the event will be streamed live on the Cage Warriors South East Facebook page or on their YouTube Channel. If you are at all interested in MMA, this is certainly a show you should be tuning in to! Use the hashtag #cwse24 to join the conversation on social media.