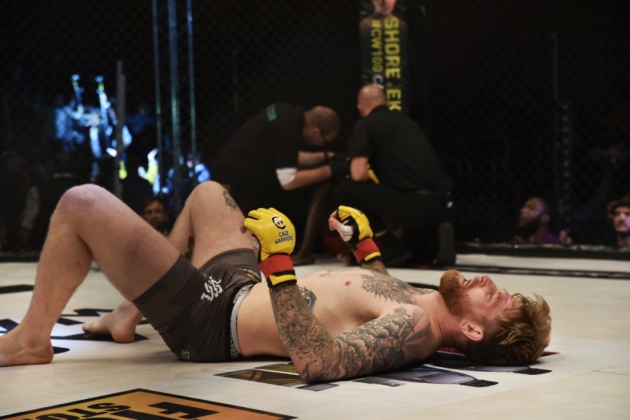 Who won fighter of the year, best fight, knockout, prospect and more?

My Fighter of the Year James Webb hits the floor after stopping Jason Radcliffe at Cage Warriors 99 in Colchester. Picture: BRETT KING

It’s been another tremendous year on the local combat sports scene, with our fighters making waves at international, national and regional level. MARK HEATH hands out his second annual Flying Knee Awards to the best of 2018.

Fighter of the Year: James Webb

In a category with a lot of contenders, Colchester’s Webb is the standout choice. The middleweight, who splits his time between Essex and SBG Swords in Ireland, has had a remarkable 2018.

He’s won three straight fights on Cage Warriors, Europe’s leading MMA promotion – all by stoppage – to improve his record to 5-1 and all but

His crowning glory was a first round knockout of noted slugger Jason Radcliffe in the main event of Cage Warriors 99 in November, a fitting climax to the promotion’s first-ever visit to the region.

Either of the above would have been a worthy winner of the award. Featherweight Aimable went 3-1 in 2018, including a 14-second knockout of Liam Bennett on Cage Warriors 97 (more on that later) and a career-best showing in dominating top prospect Josh Abraham at the aforementioned Cage Warriors 99.

The BKK Fighters product has positioned himself for a run at Dean Trueman’s 145lbs title in 2019.

McKenna, my 2017 prospect of the year, continues to prove herself as one of the best young talents in all of MMA.

Still a teenager, the strawweight made her pro debut by crushing Maria Vittoria Colonna at Cage Warriors 91, beat Eva Dourthe at Cage Warriors 94 and then dropped a razor-thin split decision loss to the far more experienced Micol di Segni at Cage Warrios 97 in a fight which many – me included – thought she won. Don’t be surprised to see her fight for the title in 2019.

If ever there was a guaranteed classic, this fight was it – two scrappy featherweights known as much for their heart and toughness as their other undoubted fighting skills.

Ipswich’s Eaton fought his way out of numerous bad positions on the floor to give Trueman – now the Cage Warriors featherweight champion – all he could handle on his feet in a back-and-forth fight which was dripping in drama and thrills.

Trueman had his hand-raised at the end of 15-minutes of madness, while Eaton decided to retire earlier this year – a fitting last fight for the always-exciting Suffolk warrior to finish his career on.

This 74kg fight for the pro K1 title on Contenders lasted less than two rounds, but nobody who saw it will ever forget the action. In his first fight in almost two years, Cromer’s all-action, brutal leg-kicker Mezzetti went to war against the flashy Bouamrane, a lover of spinning attacks and axe kicks.

Mezzetti was rocked by a huge head kick in the second stanza, his legs dipping as he absorbed shin to skull, but he blazed right back.

With fans screaming ‘there’s only one Jack Mezzetti’, the relentless Norfolk fighter forced Bouamrane to take a count as a result of his terrifying leg kicks, before ending matters with a perfectly-placed knee to the midsection.

Fittingly for a column entitled ‘Flying Knee’ Jaskiewicz pulled out a brutally beautiful example of the technique in his catchweight clash with world-class BJJ black-belt Martin back in September.

The two had traded high-level grappling exchanges, with Martin largely on top, before Jaskiewicz, of Wisbech’s Avaddaon MMA, managed to get back to his feet and landed a brutal jumping knee on Martin’s head, separating him from his senses, as he shot for another takedown in the first round.

Martin went out, only to wake up as he hit the canvas and try to continue – but the stoppage from referee AJ Jeffrey was spot on.

The man known as ‘Diddy Kong’ showed that fortune really does favour the brave when he stepped up to lightweight at 48 hours notice to tackle Bennett.

He caught the wide-swinging Bennett early with a straight right, knocking him to the floor, where he finished him with a flurry of punches.

It took him just 14 seconds – one of the fastest KOs anywhere in the world this year.

If you want jaw-dropping submissions, Abubakar is your man.

The 6-1 flyweight, who has just won the Cage Warriors amateur 125lbs Grand Prix, put on a BJJ clinic in his scrap with Boyd in Colchester.

Abubakar exhibited a masterclass of transitions between triangle and armbar attempts, before securing the tap to the armbar in round two.

Suffolk’s Allen stretched his record to 4-0 in the UFC in dramatic fashion against the unheralded Burnell in what was his most high-profile fight to date at the hugely-hyped Liverpool event.

Battling a chest infection, Trimley St Martin’s Allen was likely two rounds down going into the third and final stanza, but locked Burnell in a ninja choke to force the submission.

It’s the second time in four fights that Allen has used that technique to get the tap, pulling it out in similar circumstances to beat Alan Omer in his UFC debut back in 2015.

Unbeaten Ipswich heavyweight Fabio Wardley is my prospect of the year for 2019. Picture: SARA THOMAS

Prospect of the year (five fights or fewer): Fabio Wardley

Heavyweight boxer Wardley, from Ipswich, has everything you need to be a superstar in fight sports – he’s talented, good-looking, charismatic and talks well. Even his name is a promoter’s/journalist’s dream!

And his career is set to take off in 2019, having signed with world-class heavyweight Dillian Whyte and then making his big show debut on Whyte’s undercard with a third round TKO win at the O2 Arena last week.

Look for Wardley (now 5-0) to climb the ranks quickly in 2019, using his fast hands and superb movement to surge towards the Southern Area and English titles.

His potent combination of powerful striking and elite wrestling should see him go far in the sport – and his nickname ‘Son of Dracula’ is tremendous!

Lindsay (2-0) fought on the same card – beating Camilla Bergstrom on points – and showed some of the best angles and movement I saw from any fighter all year.

That, coupled with a laser-guided right hand, makes ‘Shieldmaiden’ one to watch in 2019.

They usually feature a combination of his training highlights and most-entertaining banter/pranks at the expense of his strength & conditioning coach Phil Day.

A great way for an up and coming athlete to use social media.

She didn’t quite retain her crown, but pro MMA bantamweight Hughes is still one of the most entertaining follows on social media.