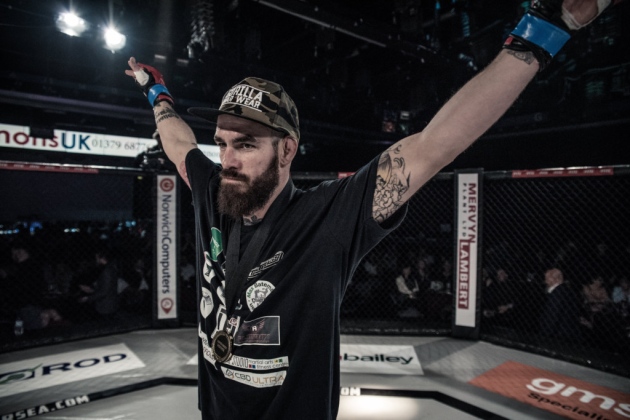 Two of the region’s best-known fighters will go to war in a huge main event on Cage Warriors Academy South East 23 later this year.

Norfolk’s Scott Butters and Essex’s Craig Edwards will renew hostilities as professionals at the Charter Hall in Colchester on April 13, having previously clashed as amateurs back in 2014.

Butters, now 2-1 as a pro, prevailed in that clash, forcing Edwards to submit to a rear naked choke in round two, but was buzzed by a head kick and bettered on the ground in the first stanza.

And Edwards will have more than revenge as an incentive – despite his undoubted talent, he’s 1-3 as a pro and coming off a first round loss at Cage Warriors 99 in Colchester. The BKK Fighters product badly needs a win to get his career back on track.

Scott Butters is 2-1 as a pro lightweight. Picture: BRETT KING

Simply put, the lightweight fight will be one of the biggest to ever grace our regional MMA scene.

Promoter Jack Mason said: “Craig lost the first fight, but he’s improved so much since. They’re both coming off a loss and they’re both looking to prove themselves and get to the big show.

“It’s a really even fight, a local derby with a lot on the line – they will both want to look good and make a statement. Neither of them want to get another loss.”

Butters, who lost his last fight in the first round to respected veteran Kim Thinghaugen at Contenders 24 in Norwich last September, said: “I think it’s going to be a really good fight – if you watch that first fight back, that’s not what we are now.

“From that, Craig went on an absolute tear and was beating everyone. As a pro, his record doesn’t do him justice. He’s an absolute animal and he’s got the same attitude as me, he wants to fight the best.”

But Dereham’s Butters, 31, is predicting a repeat of the result of their first fight. “I’m going to play it a little bit differently,” he said. “I’m going to go out there a lot more relaxed, and I’m not going to take a head kick in the first 20 seconds!

“I think there’s a very good chance of a TKO victory for me – we’ve seen a few holes in his game, and there’s going to be elbows!”

Unsurprisingly, Edwards has a very different view of how the battle will play out. He said: “I think I’m just going to beat him up.

“I let him off the hook last time – I could have finished him, but I just got carried away and beat myself.

The 26-year-old added: “This is my chance to start turning things around, just like I did in the amateurs when I won five fights in a row. If I can put on a show here then after this one, or one more, I’ll be back on Cage Warriors.”