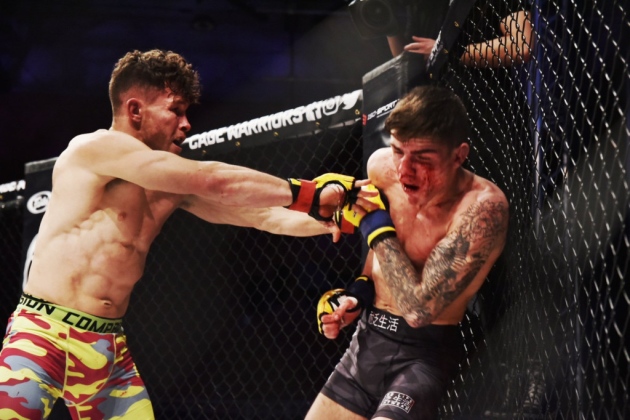 Cage Warriors contender Steve Aimable believes a career change holds the key to unlocking his true potential and moving him even closer to featherweight gold.

The BKK Fighters product (12-5) steps back into the cage at the O2 a week on Saturday ready to halt the momentum of Declan McAleenan, a man riding a five-fight win streak, at Cage Warriors 102. Aimable is in the form of his life himself, having won four of his last five and two in a row, including an impressive points win over much-hyped prospect Josh Abraham at Cage Warriors 99 in Colchester last November.

But he believes his skills are about to reach a whole new level with a change of jobs – as a civil engineer, he’s been travelling the length and breadth of the country with work, fitting in training when he could. Yet, eager to spend more time with wife Kayleigh and with his first child on the way, he’s retraining as a gas engineer – which will see far less travel and a more structured approach to training.

“Since I turned pro I’ve only really been training twice a week,” he explained. “That sort of training for fighting at this level is just ridiculous. Now I’m changing jobs who knows how much better I’m going to be. I think I’ve reached a level where I’m not progressing, but if I keep winning my opponents are just going to get better – now I’ll be able to train how I want and hopefully that will take me to the Cage Warriors belt.”

In McAleenan (5-1), the 31-year-old faces another talent on the rise, a tall and rangy southpaw who’s claimed all five of his wins by stoppage – three KO’s/TKO’s and two submissions – on the regional scene.

But Aimable believes he’s a cut above his foe – and plans on showing it once more on Europe’s biggest MMA stage.

“I feel excellent – this is probably the most I’ve ever trained for a fight,” he said. “He’s quite a bit taller than me and he’s a southpaw, which will be awkward. But as long as I stick to the gameplan and keep calm, I believe my experience will show.”

Predicting the fight, he added: “He’s definitely going to use his range to try and push me back, but as long as I’ve got my hands up, close the range and do what we’ve been working on I feel I can finish him.

“I don’t believe it’s going to go the full three rounds – I’ll win by either submission or TKO.”